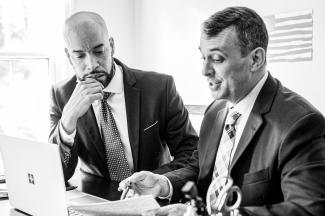 Thursday, November 11, 12:12 pm EST. Thankfully the sun doesn’t rise and set on the whim and fancy of the stock market, latest election or our favorite economic indicator. This month we’ll walk through thoughts about the Virginia and New Jersey gubernatorial election results, inflation, the US “debt limit” and (by default) the mood swings of the stock market.

Earlier this month only two (2) out of our fifty (50) United States held gubernatorial elections. Because both Virginia and New Jersey host “off-year” elections, their results are often overly read into and exaggerated. In New Jersey, where there was “shock and awe” that Governor Phil Murphy was reelected with a “razor thin” margin of victory (less than 1%), history reminds us that a Democrat hasn’t been reelected to be NJ governor since Army Air Core veteran Brendan Byrne in 1977.  Virginia’s proud purple state status came into view this election cycle as well. When then Governor-Elect Terry McAuliffe won election in 2013, it had been the first time a candidate from the same party as the sitting U.S President had won election since lawyer Linwood Holton in 1969. In electing Governor-Elect Glenn Youngkin, Virginia stayed purple (or “bluish”) for at least four (4) more years.

With clients in both New Jersey and (many) in Virginia, we paid particular attention to these elections knowing that their results could affect the national conversation around the infrastructure economics that we’ve written about before. Despite much of the “noise” neither of these election results were world-changing and the national conversation (debate?) around physical and human infrastructure continues in our US Congress.

Sometimes it takes some real parsing of words to figure out headlines. The news today is that inflation has “jumped” and hasn’t risen this high this fast since 1990. The comparison is year over year: meaning we are comparing October 2021 with October 2020 and comparing the increase (6.2%) to the last time inflation increased that much year over year (which was 1990). Do you remember 1990? In 1990 we had an internet but very few web pages. There was little commerce happening online – besides a nascent AOL – but total US debt was less than $4 trillion (only 54% of our gross domestic product!). Manufacturing had not yet been outsourced by 1994’s North American Free Trade Agreement (NAFTA) and (independent) US Presidential candidate Ross Perot had not yet articulated the “giant sucking sound” that would decouple manufacturing from the United States. We were on the precipice of becoming a different country economically. Now, we most certainly are a different country economically.

It’s easy to recognize food, gas and housing price increases but it is more difficult to precisely decipher why they are increasing. More importantly, it’s difficult to estimate how long rising prices will last and what to do about inflation as an investor. Thankfully, you are more than “investors,” as with our help, you are also “planners.” You see the price increases but you also see the lack of truckers causing supply chain issues. So, which is it? Economic uncertainty caused by rampant government spending or DMV wait times for would-be-trucker driver’s licenses? Thankfully, you don’t have to know. We are sticking to your financial plan, the historical averages and our belief that the tenuous balance between capitalism and democracy will hold true (for your retirement and beyond).

Last month I shared extensive “debt limit/ceiling” definitions and detail. Even though this has faded off of the news cycle, our firm still believes a potential US default on debt, even for a day, is an important, worldwide economic issue. It turns out that December 3rd may not be the date that the United States runs out of cash. According to the Bipartisan Policy Center, that date may fall anywhere between December and February. We will keep following the news.

Next week we will host a conversation with Julia Healey, CEO of United Charitable. Julia started her career in finance and over the last 10 years has worked up from Financial Director, to CFO, to CEO of United Charitable. Beyond providing financial advisors a vehicle to create donor advised funds for their clients, her firm provides back-end support for future community stakeholders who would like to lead a named, charitable cause without the paperwork of starting a non-profit. United Charitable calls this “Fiscal Sponsorship.”

Join us for the Q &A discussion here.

The firm owners believe that busy, dual income couples should feel good about the wealth their building for their families. "Feeling good" begins with implementing a sustainable investment strategy (SRI, ESG) and continues with turning family values, standards and rules around money into a family governance structure that creates harmony for everyone involved. In meetings, the two owners strike the right balance between attention to detail and keeping serious subjects "light."